Am I ready to do a genealogy do-over? You betcha! 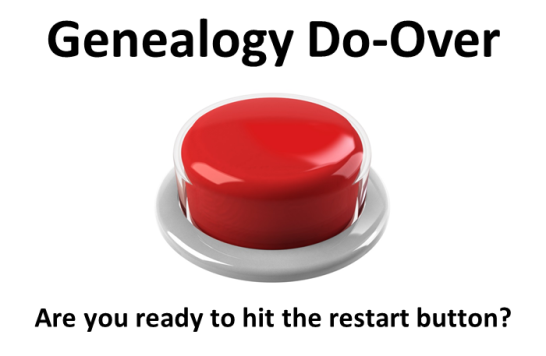 So, this was in my mail last week. Caught my attention because I am at an impasse on many of the relationships on my family tree. So and so says I have the wrong Yeakley...I have documentation that may not be correct. I have been working on this for years and I am ready to chuck the whole thing. Am I ready to start over?

Along comes Thomas MacEntee from GeneaBloggers. He is starting over and is taking us along for the ride. Check out his link and see if it appeals to you too. There are lots of us who want a fresh start for many reasons.

I can't wait until January 2 to begin again. I think it will be my best trip of the year!

1934 - Merry Christmas from my grandparents and me

Ernest Marvin Yeakley (1886-1943) and Nancy Ellen Jones (1887-1938) were my grandparents. I never met them (they were gone before I was born) but they were and still are a part of my life because they lived on through my mom. I thought I had found all the really interesting stuff my mom left until I started back through it again. That's when I discovered this Christmas greeting my grandparents sent in 1934. What a treasure and what a treat. 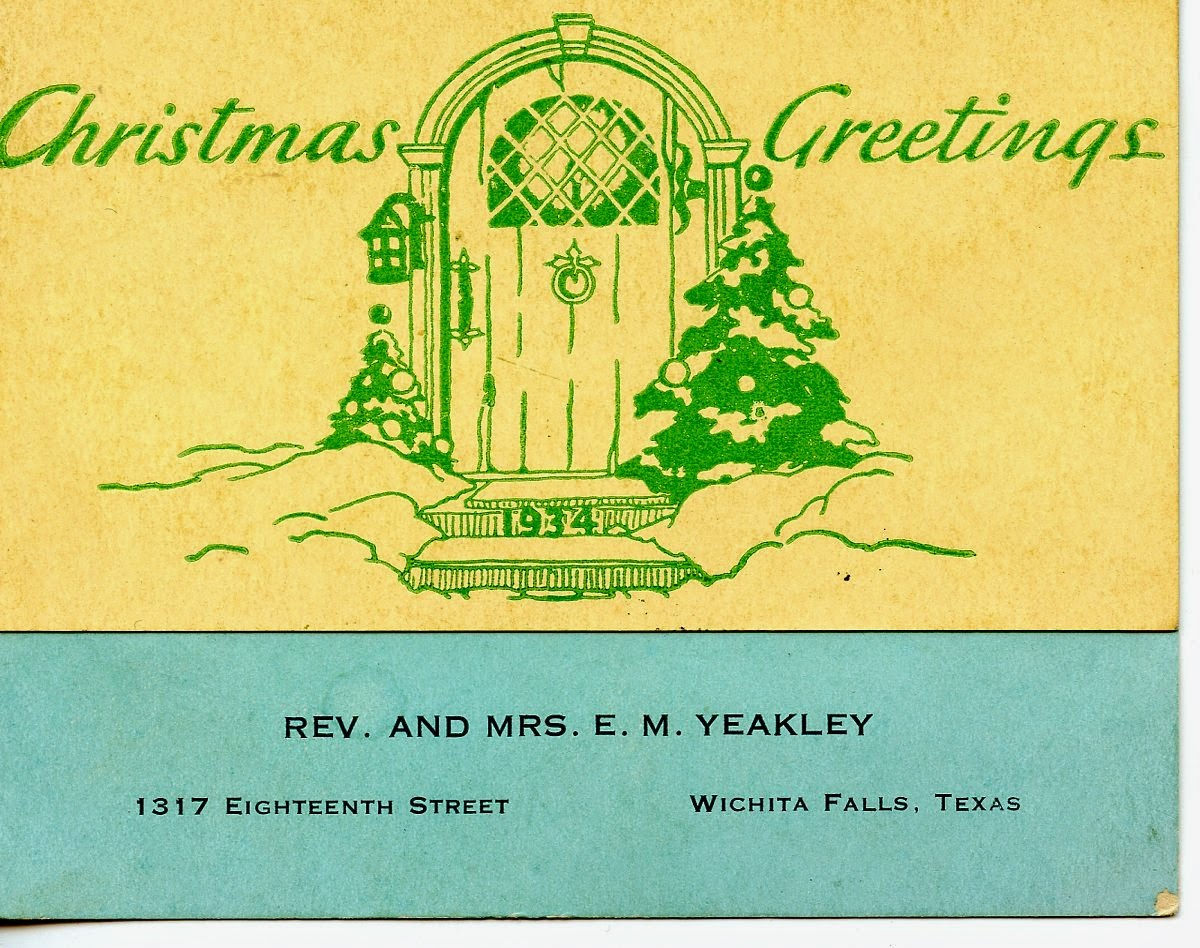 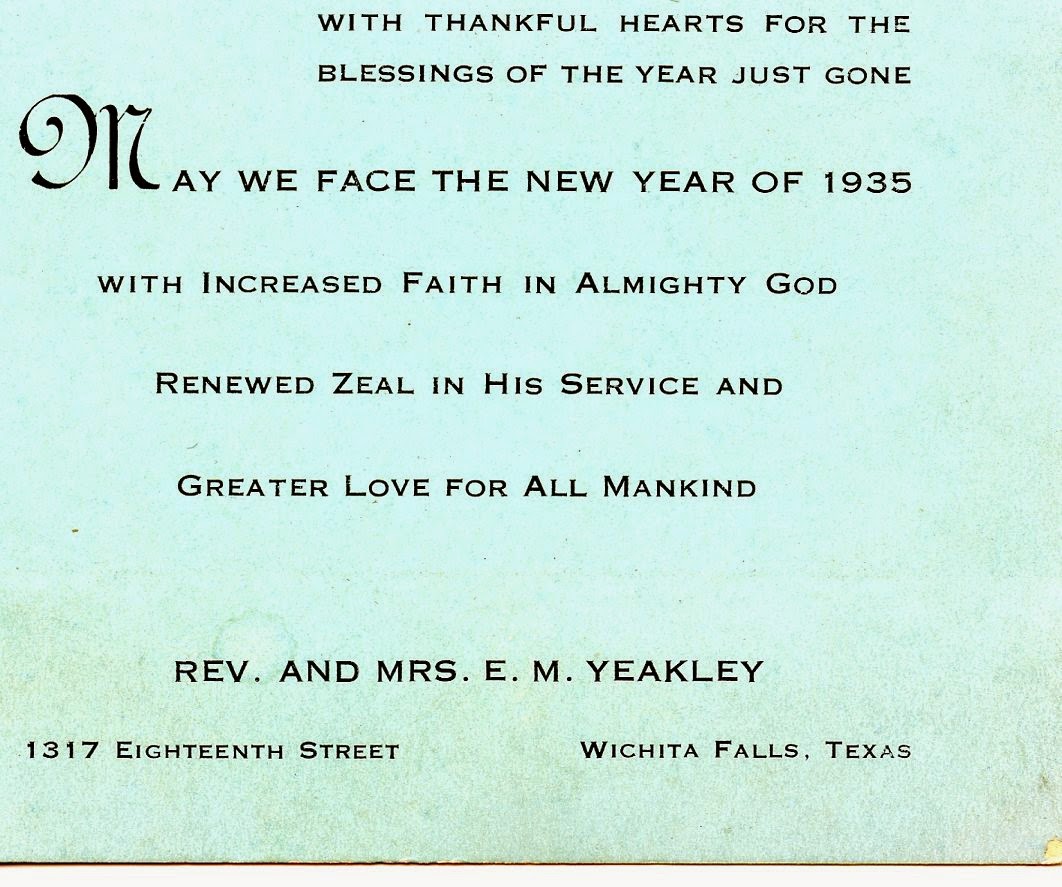 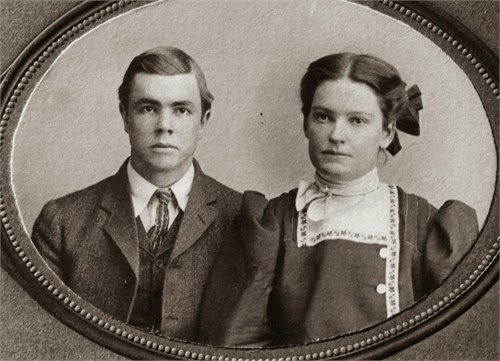 Found in my email on October 2, 2014, this was an unexpected blessing. It has been more than 50 years and yet Wayne felt that it was important to reach out and share this memory. I am so glad he did.

Hello Ann;  I wrote the following note to you last night and then couldn’t for the life of me figure out how to post it. I’m kind of long winded and tried to shorten my story to you and still make sense. I liked your Uncle, and though didn’t know him all that well, found him a man easy to be around. Not all of the NCO’s treated the lower grades all that well he did. Anyway, here it is:
.Hello; My name Is Wayne Lee Derrick, age 73, retired here in Spokane, Washington. I served in the USAF from August 1959 to August 63.
I was stationed at Mather AFB from July 60 until discharge and in the same squadron as your Uncle Clarence.
In early July my wife and son left California early to return home and find us a place after my discharge. For reasons I don’t remember (probably getting the car repaired) I was riding back and forth to work with Clarence for a couple days. Another friend stopped by my office and asked if I wanted to stop at the NCO club for a beer and told me he could drop me at home. I agreed and after telling Clarence we went on our way. It was the day of his accident. On the way home we drove by the scene and saw the two vehicles. By all that is logical I should have been with him and would have been killed also.
If you would like more information about that day and for that matter about the work and position he held please contact me. I will be more than happy to talk to you. I hope you receive this email as that day has never left me.
I had an experience today while driving outside the city which startled me and it brought back the memory.

Regards
Wayne
Posted by Ann Hinds at 7:26 AM 1 comment:

Didn't make through the 52 ancestors in 52 weeks

On May 1, 2014, my son, Niles, broke his leg warming up for a baseball game. This is where I share a very important note. If more than one child is running to catch a fly ball, make sure they call it. Unfortunately, the two boys were not clear on who was going for the ball and the resulting collision took my son out of baseball for the rest of the season. The good news is the other child was OK and only bruised. 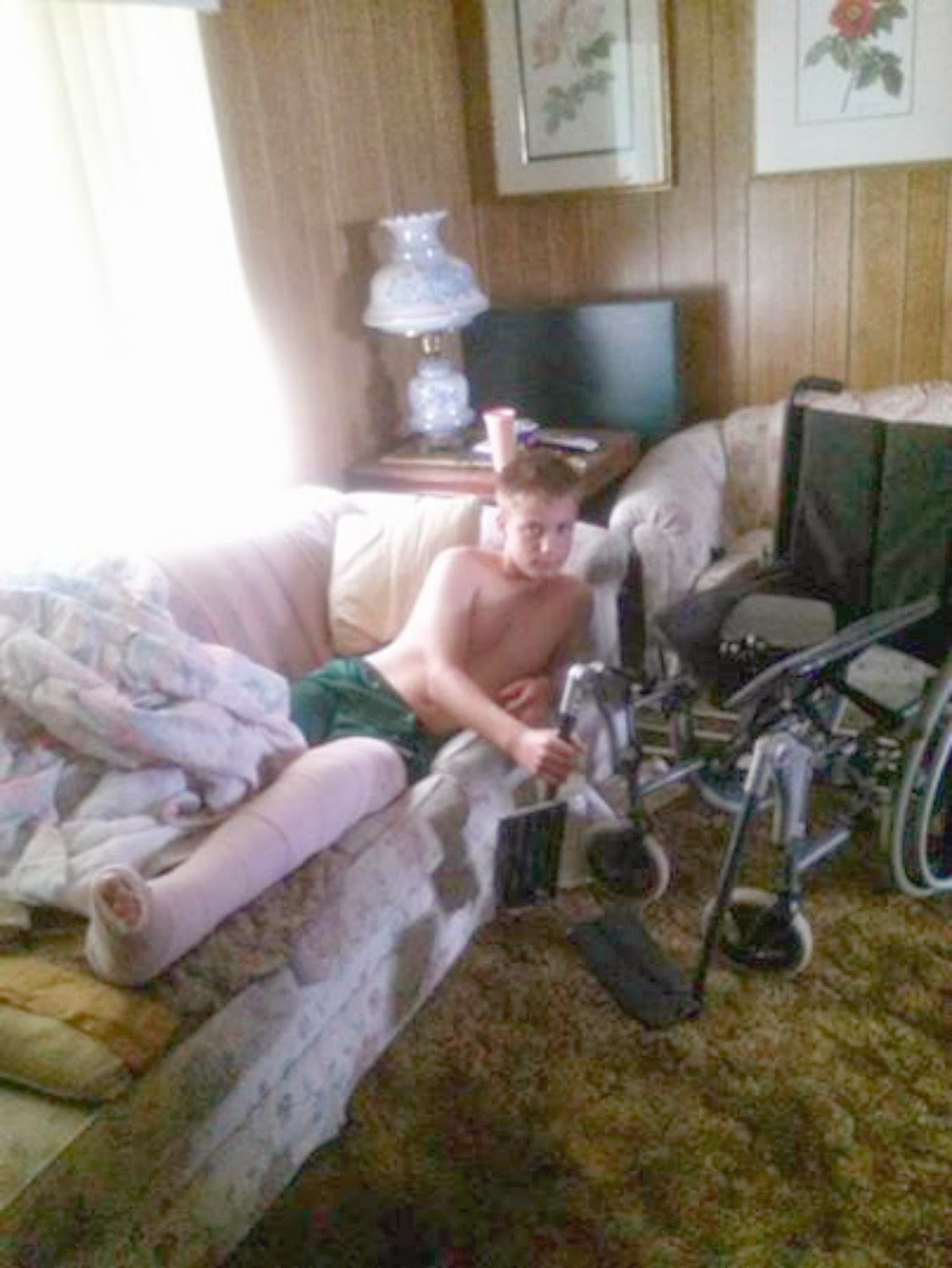 Just home from the hospital. 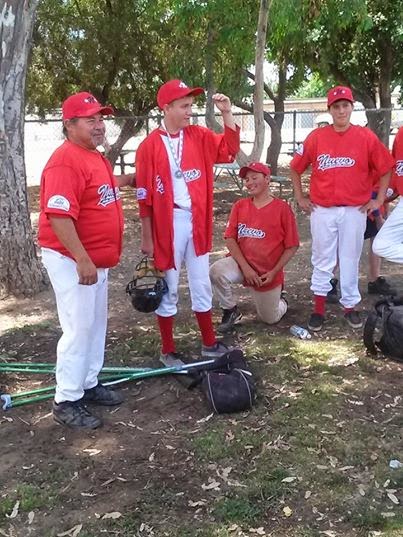 He is still supporting his team and although he can't play, attended all the remaining games. Here he is standing without his crutches.

What does this have to do with 52 ancestors in 52 weeks? He is a Yeakley descendant and so someday, will be an ancestor. The bigger pictures is before the story of the broken leg is lost, why not write it down and share the pictures.

Taking care of him took much more time that I expected so blogging was one of those things that got left behind. Now that he is mobile, it is so much easier for him and me and I can resume a regular blogging schedule.
Posted by Ann Hinds at 7:34 AM 1 comment:


Mary B "Polly" Morris is my questionable link. Her parents are given as Charlotte "Lottie" Warner and William F "Billy" Morris. That seems to be correct as there is documentation. However, there is no documentation she married William B. Fussell. This is where those with private trees come in and accuse me of blindly copying incorrect trees right after they "borrow" a few photos from my very public trees. Nevertheless, I am am sticking with Mary B "Polly" Morris until proved wrong.

The only thing I can find is a census report from 1850. It lists her husband as William Fussell but the list of children does not completely match. Some of the names are the same but there are several that don't appear on my records. That makes it suspect. For example, their daughter, Martha Mary Fussell is my 2nd great grandmother. Although I have yet to find a death date, there is plenty of documentation confirming she is related. The documentation was discovered by my mom a long time ago. Still, on the census, the name and date don't match.

There is a book called Trinity County Beginnings, published in 1986, that mentions William B Fussell and Mary B "Polly" Morris. It does state they had ten children but it doesn't share their names. Since family written books are suspect and I don't know if there are sources attached, I am going to say that it is true and continue to research the missing pieces.

This is not a proven relative. Wettenhall Warner might be my 5th great grandfather but he is on the other side of the 4th great grandparents that I am having trouble proving. He was the husband of Elizabeth Sarah Cargill, one of the relatives on the way back to the Mayflower.

Wettenhall has a stellar history. He was an Irish immigrant. Although there is no military history, he was the Justice of the Peace in Orangeburgh, South Carolina during the Revolutionary War. And there's a tasty tidbit about him possibly related to Pocahontas. This is how family rumors are started but this can never be proved. My cousin has a much more interesting family that I have and I would love to tell her that I am related to Pocahontas. I need a feather in my cap (pun intended).

His father-in-law left him land in his will and it appears the family was well-to-do. They were also deeply religious and were the founding members of the oldest Baptist Church in South Carolina.

I hate to say this but we have a family member who is less than perfect and therefore interesting. Melendez Morgan Yeakley was the brother of my grandfather. My grandfather, Ernest Marvin Yeakley, was perfect. Not that he wasn't interesting but he was just a very good man, father, and husband. M. M. Yeakley apparently did not get all the Quaker genes. 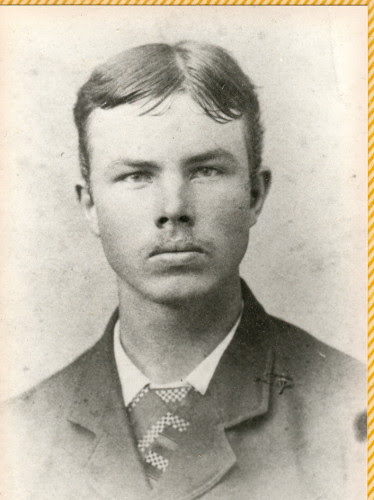 I think he was a very good looking young man. It's an interesting picture as I see the same expression on my oldest son.

M M (as he was called) was born in Collin, Texas on March 17, 1868. He was the oldest son of George O. Yeakley and Lydia Grubbs. He was 18-yrs-old when my grandfather (the youngest child) was born. 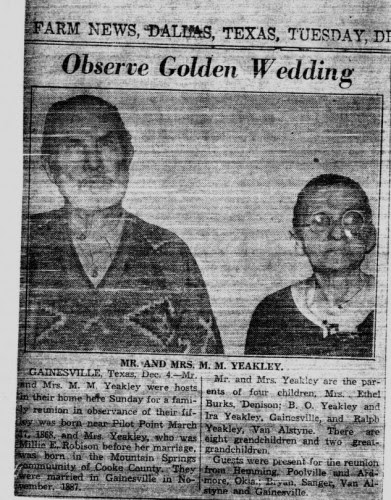 In 1904, M M was the postmaster for Mountain View in Cooke County, Texas. In the Fort Worth Star-Telegram, there was a blub about Mr. Yeakley. It reads, "M M Yeakley, postmaster at Mountain View Cooke County, who is under a charge of violating the postal laws, had a hearing before the commissioner at Sherman and has been released on $500 bond." Unfortunately, I don't find any other remarks concerning this case so don't know the whole story or the outcome. However, the Quaker genes must have kicked-in because the rest of his life seems to be ideal. He does look sort of angelic in the photo below. 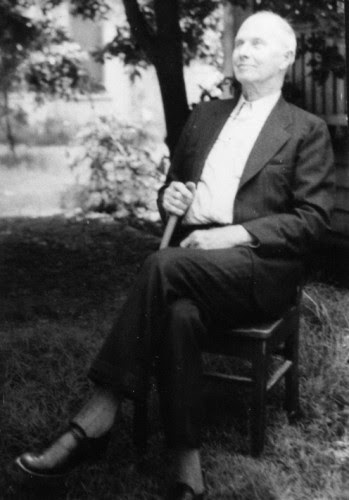 M M died in Gainesville, Texas on April 14, 1946 at the age of 78. Millie followed him two years later on July 9, 1948. Her obituary says she was well respected for her exemplary citizenship. She must have had a very good effect on her husband.

At last, an ancestor where there is information. How correct it is has yet to be determined but at least it gives me dates and places and a little bit of color.

The source of the information is from, A 20th-Century History and Biographical Record of North and West Texas, by Capt. B. B. Paddock, published 1906, volume II, page 50. Right off the bat, the information on the arrival of the family is in question after finding out Benedict Yuchli  is not correct. Still, by the time George O. Yeakley came along, there is verified documentation. I want to make a trip to the Fort Worth Public Library to see this book.

George O. Yeakley was born on February 23, 1809 in Greene County, Tennessee. He was the 8th of 13 children. His parents were Henry Yeakley and Susannah McNees. Susannah has her own history that is also documented. One thing said about her was mentioned in the Pictorial and genealogical record of Greene County, Missouri, was she was a “most excellent woman and deeply religious, a Quaker”. The family was affiliated with the New Hope Monthly Meetings in Missouri.

Faith runs deep in this family. George married Lydia Grubbs on February 23, 1832 at the New Hope Monthly Meeting in Rheatown, Tennessee, on his 23rd birthday. She also came from a Quaker family and the four older children are documented in the Quaker records.

They lived in Tennessee a long time but in 1870, we find him at 61-yrs-old living in Denton, Texas. There is some speculation that he moved about the time President Lincoln was assassinated which would have been in 1865. The records indicate that he was a teacher, farmer, and blacksmith but went on to become a doctor and the only one in Mountain Springs, Texas.

He and Lydia raised six children, one of them my great grandfather, James Madison Yeakley. 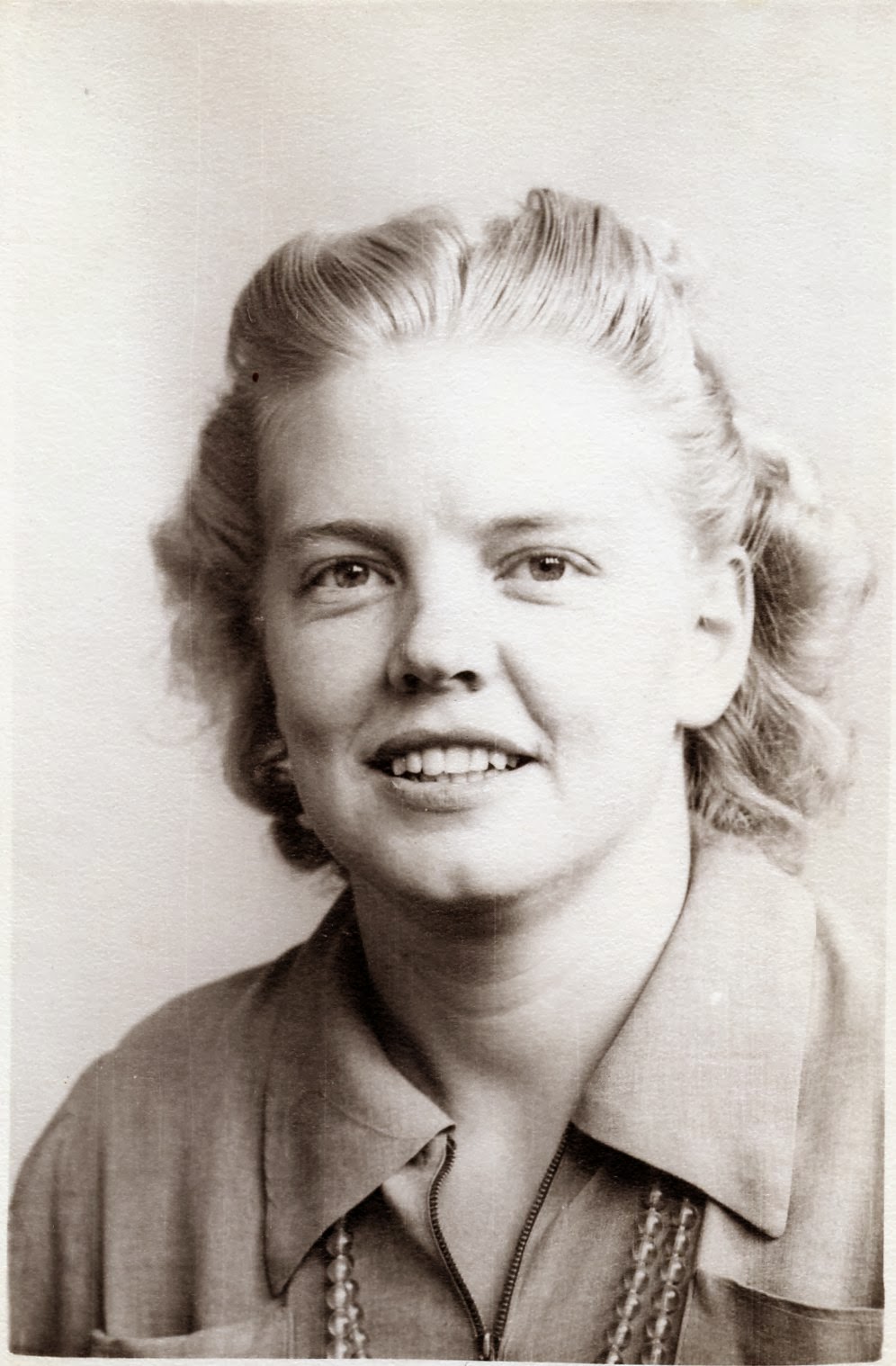 A must have for a family history road trip